There was something strangely downbeat about the reaction as news of Chelsea‘s pursuit of Raheem Sterling leaked into the public domain.

At most clubs the prospect of securing an experienced and prolific international from the reigning Premier League champions, potentially for a knockdown fee to boot, would surely have set pulses racing. Here is a player who has been integral to Manchester City‘s recent successes. A forward who has won the title four times under Pep Guardiola and whose league goal tally has eclipsed that of Chelsea’s respective top scorer in the competition in each of the last five seasons.

And yet, while social media should never be considered the most accurate of gauges, those who recognised a possible bargain at the mooted price of £35 million — a reflection less of Sterling’s pedigree and more of the fact his contract at the Etihad stadium will soon drift into its final 12 months — ended up rather drowned out by others apparently outraged at the Londoners’ interest.

Maybe Sterling lacks the glitz and glamor some craved for what may well be billed as the first marquee arrival of the Boehly-Clearlake ownership at Stamford Bridge. At 27 he clearly lacks re-sale value but, on the other hand, he should be entering his prime. Yet perhaps familiarity counts against him given he has been a fixture first at Liverpool and, across seven essentially successful seasons, with City over the last decade. Not to mention within the England set-up, for whom he boasts 77 caps, remains a regular and wears the captain’s armband in the absence of Harry Kane.

Where is the fantasy, or even intrigue, in signing someone so well established? Furthermore, how can anyone expect the fanbase to be whipped up into a state of excited frenzy at the potential arrival of a player City seem so willing to discard? This inevitably has the whiff of the cast-off about it, for all that the league table would suggest a first-team regular released by the champions may well still have plenty to offer a side currently embroiled in a domestic game of catch-up with City.

Others may simply not rate him, of course, preferring to recall the blind alleys into which he has scuttled or the opportunities he has missed over the years rather than the 109 Premier League goals he has ratted up across his career to date. Of those, 78 have been registered in 161 top-flight appearances for City over the last five seasons. Only three players — Mohamed SalahHarry Kane and Jamie Vardy — have been more prolific over that period, even if, for some, that impressive haul should still be accompanied by an asterisk given the amount of chances Guardiola’s team creates.

The reality is that, while everyone seems to know what Chelsea would be securing by signing Sterling, some are still apparently reluctant to acknowledge that he would actually appear an asset worth snaffling up. Particularly by a club seeking to rebuild as they learn to adjust to new circumstances.

If they are satisfied his drive and ambition remain as strong as ever then there is little risk in signing Sterling. That should count for something at a club whose previous owners forked out £97.5 million on Romelu Lukaku last summer and are now loaning him back from whence he came.

It is worth acknowledging why Chelsea appear to have this opportunity.

It is undoubtedly the case that Sterling has slipped slightly down the pecking order at City over the last few years, provoking a level of frustration with which he went public last season. “If there was the option to go somewhere else for more game time I would be open to it,” he told the FT Business of Sport US summit in October 2021. At that stage he had started only two of City’s seven Premier League games of the campaign.

Things did perk up marginally thereafter, but his minutes with the league champions have undoubtedly slowly reduced over the past couple of campaigns. Last term he played less than two-thirds of the minutes available to him in the Premier League — 2,128 — for the first time since his initial season at City under Manuel Pellegrini back in 2015-16. 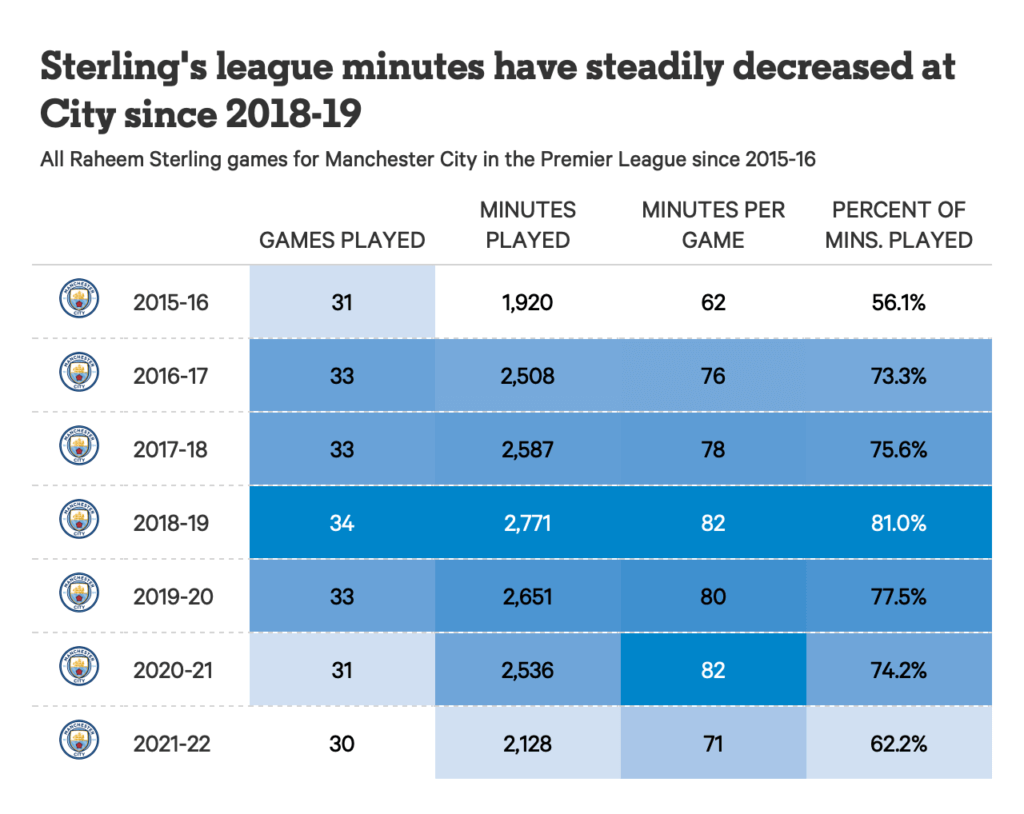 Just as significantly, his involvement had decreased in some of City’s bigger fixtures. A player who cost £49 million when signing from Liverpool who, only recently, still felt so integral would have hoped to play more than the 28 minutes he managed over the two-legged Champions league semi-final against Real Madrid in April. His cameo at the Bernabeu in the second game was restricted to extra time, when the visitors were desperately chasing the tie.

He did start the home games against Liverpool and Chelsea in the Premier League, as well as his team’s defeats to fourth-placed Tottenham Hotspur. But, last autumn, he had managed only 27 minutes as a substitute in the fixtures at Stamford Bridge and Anfield – games that were recognised as contests against City’s closest challengers at the time.

Admittedly, Guardiola would have had specific game plans for those particular contests. And the City manager clearly boasted a plethora of attacking options, with Erling Haaland having since been added to the ranks. But concerns over how much of a role Sterling would play, and whether he would be offered the chance to influence the biggest games in the club’s cluttered schedule, may go some way to explaining why the England forward is now spending time reflecting on his options.

Yet if that suggests this is a player on the wane then the data says he still has plenty to offer.

A look at the impact Sterling has made when given the opportunity at City — admittedly in an attack-minded team crammed with creative talents — reaffirms his talent and pedigree, as well as providing a reminder that he would potentially represent an immediate upgrade on the likes of Timo Werner, Hakim Ziyech, Christian Pulisic and Callum Hudson-Odoi in any of the wide berths in a Tuchel 4-3-3 or 3-4-3. Or, indeed, operate just as effectively as one of the narrower No 10s if the head coach pursues his 3-4-2-1 system.

Sterling’s versatility will surely appeal to Tuchel. At City under Guardiola, the forward has featured most often from the left, where he might consider himself most comfortable, but has also operated regularly off the right flank. The quartet of Chelsea players listed above have flitted in and out of the team, suffering from dips in form and fitness along the way, to the extent that none has ever been completely convincing.

Each has ability and talent. But, at present, Sterling’s output would appear to trump them all. 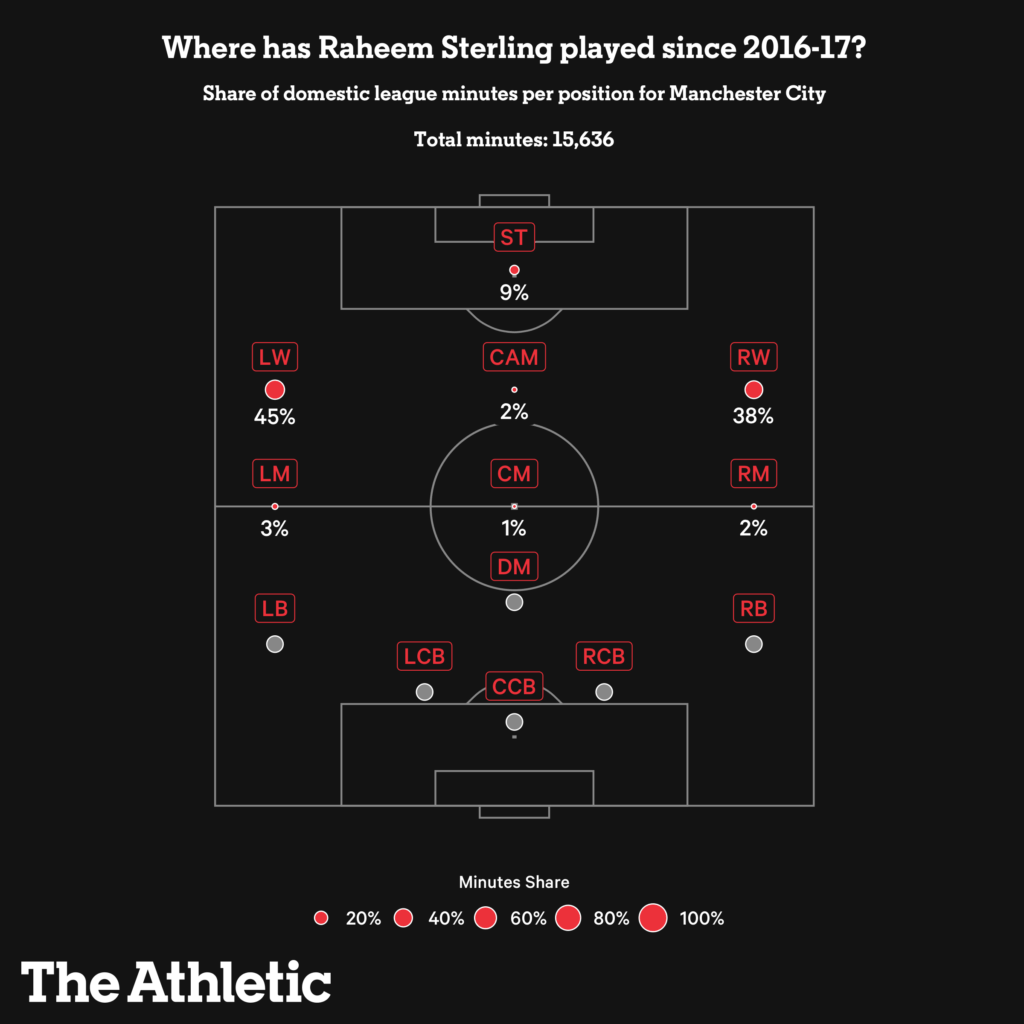 Just as intriguing is the fact Sterling has also featured nine per cent of the time through the middle, meaning he could be considered a back-up to Kai Havertz — who will presumably be first-choice to lead the line in the season ahead — and hope to make a better fist of the brief surrendered by Lukaku, who is returning to Inter Milan. He did the same at times for Liverpool. Could Sterling’s arrival allow Chelsea to park their search for an out-and-out striker and allow Todd Boehly, as interim sporting director, to concentrate instead on other areas of the team in pressing need of strengthening?

Certainly, the forward’s ability to drift into the kind of positions where Chelsea’s principal creators instinctively funnel the ball might make him more of a goal threat than Lukaku. A glance at the evolution of where he conjures his shots suggests he has steadily honed those runs, optimizing his movement and timing, over recent years.

Indeed, last season the shots he mustered boasted his lowest average distance from goal (12.9 yards). He is making those darts into the six-yard box in anticipation of his team-mates picking him out as a finisher. While it was a lower sample of attempts, his xG per shot — the average quality of a given effort on goal — of 0.24 meant that an average shot of Sterling’s had a 24 per cent chance of finding the back of the net.

For a player often criticized for a lack of ruthlessness, that is actually very high. 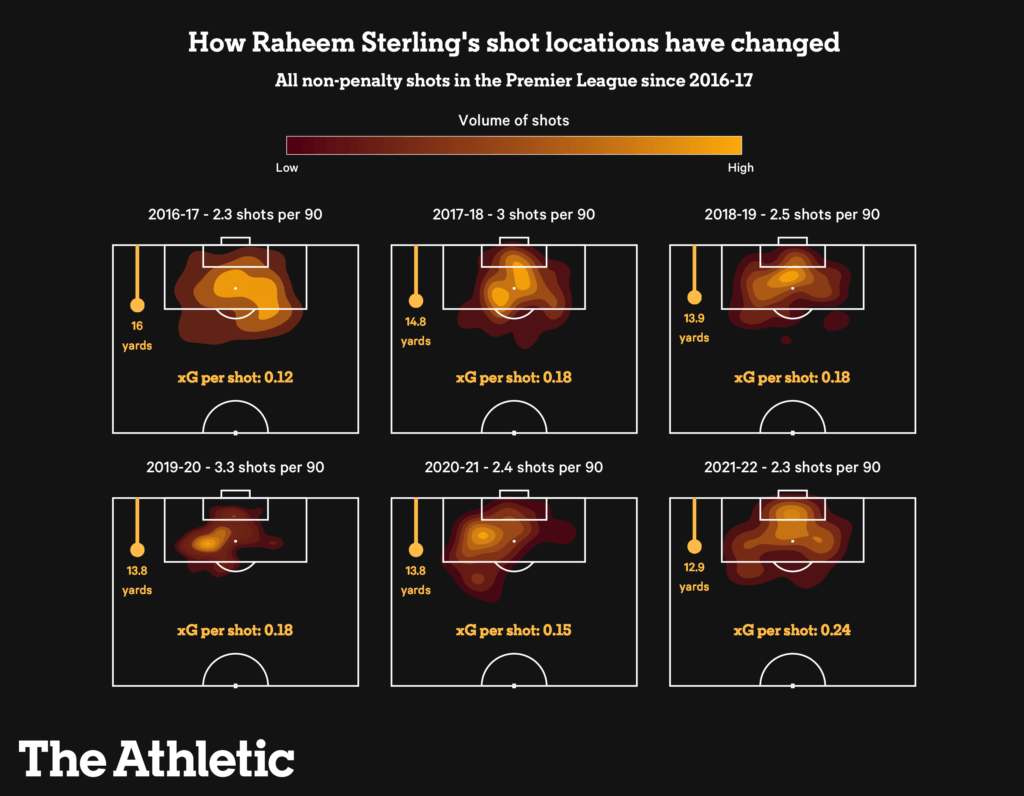 In fact, among attackers who naturally drift wide and have played over 2,000 minutes of Premier League football since Sterling joined City in the summer of 2015, no player has a higher xG per shot than his 0.18. Put simply, the shot locations he roots out are of a consistently high quality. And while people often suggest he misses too many clear-cut opportunities, his conversion of big chances — 47 per cent — since 2015-16 is actually slightly above the average of 45 per cent among wide attackers, and the same as Mohamed Salah.

In short, he is a goalscorer, which would make him a considerable asset for a club whose joint leading Premier League scorer of non-penalty goals since August 2017, with 22, remains Eden Hazard — a player who left Stamford Bridge for Real in the summer of 2019.

Maintaining that theme, looking at his non-penalty goals against xG across each season of his time at City, Sterling has performed above average more often than not, suggesting it is something of a myth that he underperforms against expectation. Rather, his non-penalty goals of 0.48 per 90 minutes since 2015-16 is the fourth highest among the division’s wide attacker cohort.

That figure actually eclipses Sadio Manea player who tended to be far more heralded for his goalscoring prowess. 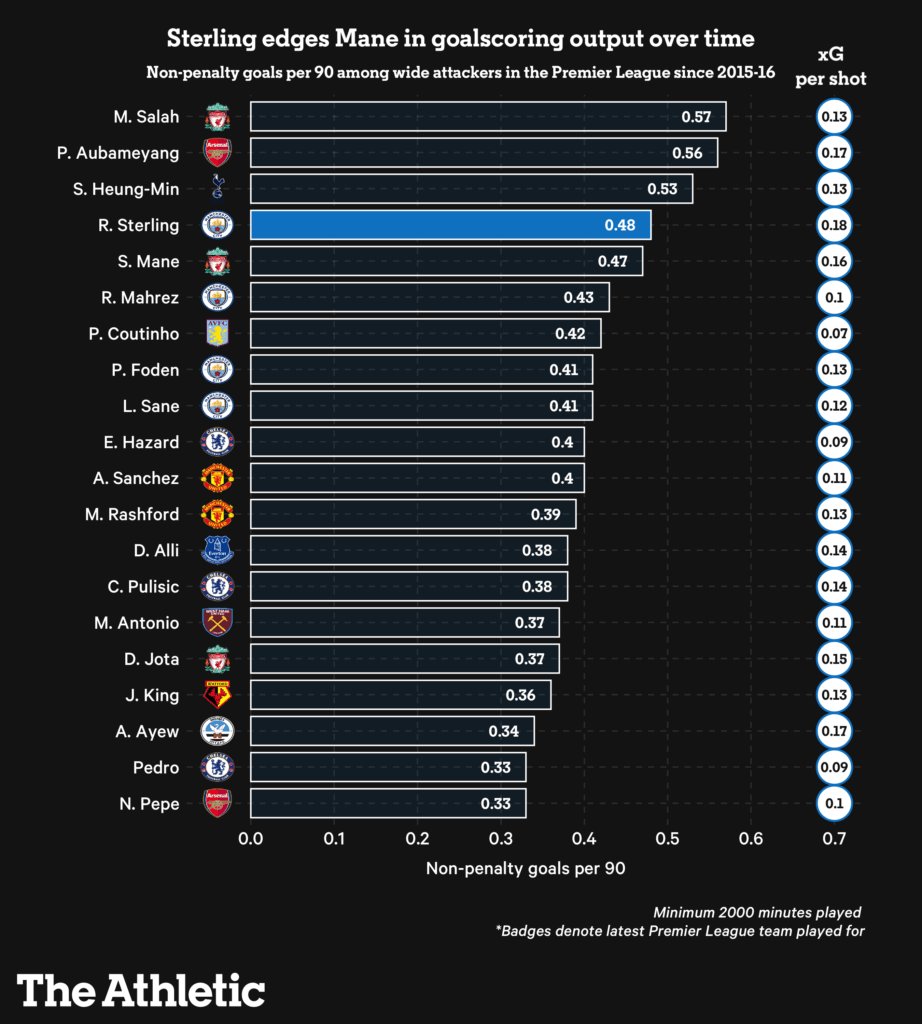 Yet Sterling does not simply offer bite in the box. He has created 250 chances for team-mates over the last five seasons — a tally bettered by only nine others — and has completed 320 take-ons in that time, the fourth highest in the Premier League. He carries the ball into dangerous areas, often from wide, and, on that basis, should provide a conveyor-belt of opportunities for the side.

The final graphic looks at his attacking output compared with those across Europe since the start of the 2021-22 campaign. Included are his fellow City players and potential new team-mates at Chelsea, as well as notable names from some of the wider European superpowers for context, with the chart designed to highlight creativity and shooting by looking at non-penalty goals and expected assists. (the xG value of the shot that is assisted).

It suggests that, while Sterling is not as creative as Jack Grealish, Phil Foden, Riyad MahrezHakim Ziyech and Mason Mounthe is far more of a goal threat than any of them while simultaneously creating chances worthy of an assist nearly once every five games for City since the start of last season. 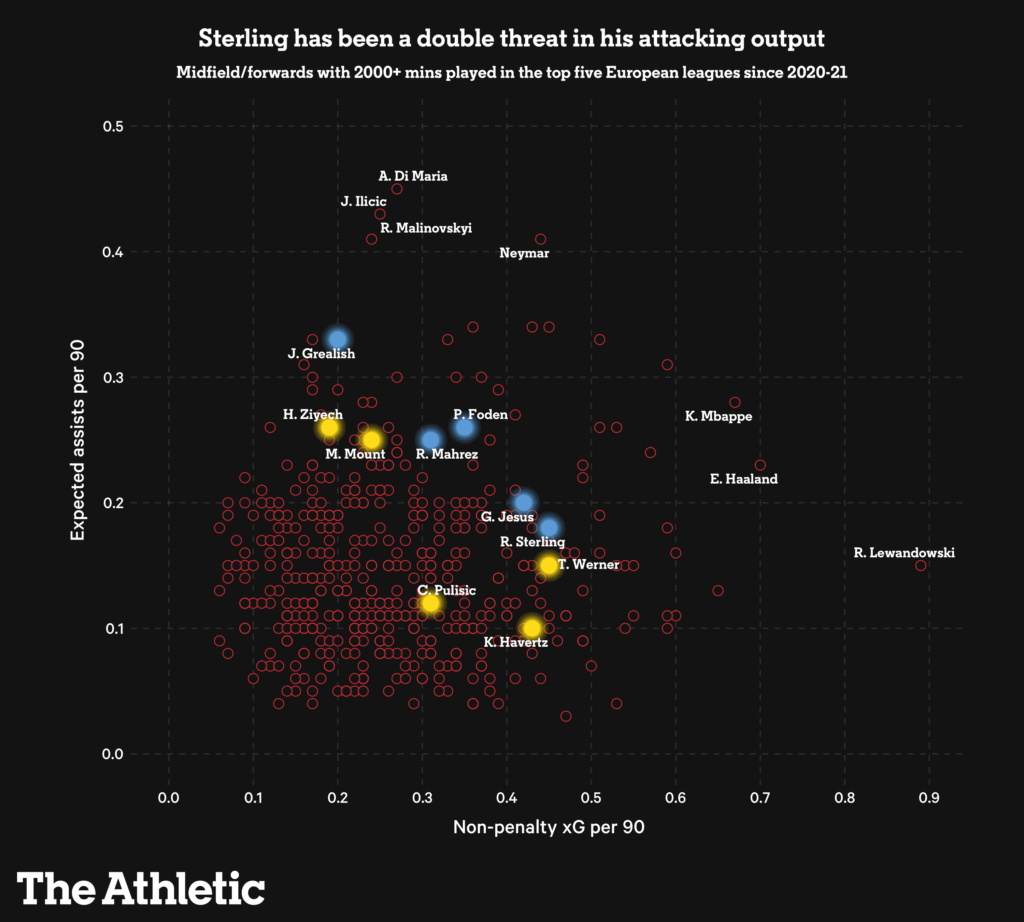 Perhaps, in that context, Sterling’s appeal to a club undergoing an overhaul becomes far clearer. Replicate those numbers and his should be a transfer to have the masses salivating, for all the apparent familiarity with the player’s perceived flaws.

Chelsea have lacked that player who senses the time to scurry into the six-yard box on to a team-mate’s pinpoint delivery. Tuchel may have plenty of other creative options on paper, but this is a player of pedigree who is well seasoned in excelling in the Premier League. He is homegrown, which would be of benefit in terms of European competition, and the head coach might hope he would help inspire the younger players within the set-up, and provide another voice of influence in the dressing-room.

Chelsea’s squad may still boast experience at club and international level, and players who have excelled across Europe as well as in international tournaments. But, of the current first-team regulars, only four players — N’Golo Kante and Ruben Loftus-Cheek (who had a bit-part role in 2016-17), and the defenders Marcos Alonso and Cesar Azpilicueta — have won the Premier League. Sterling has claimed it four times in the last five years.

Maybe his knowhow will rub off on his new club-mates as Tuchel’s Chelsea, under the Boehly-Clearlake ownership, seek to bridge that gap to the top two.