At Li’s place, Sheila fumes, “So much for Finn needing his medication.” She stomps on Li’s cellphone and warns her she’s made a big mistake.

In Brooke’s bedroom, she is has earphones in when Ridge appears and starts her. He’s glad she had the door locked. Brooke can’t believe Sheila hasn’t been caught yet. She asks what brings him by. He just thought he’d check on her. Brooke beams. Ridge is worried, knowing how Sheila feels about her. Brooke figures she’s probably halfway across the country by now, but thanks him for looking out for her. Ridge grins, “Always.” They wonder where Sheila is and who she’ll target next.

At the Forrester mansion, Quinn admires Wyatt’s photos from when he and Flo were on their work trip. He’s puzzled that he got back yesterday and didn’t hear from her. She claims she’s working on boundaries, but he doesn’t buy it. “What’s really going on, mom?” Quinn confesses, “It’s Carter. I’m worried about Carter.” Wyatt’s concerned that “worried” is a euphemism, but she assures him she’s been loyal to Eric. Quinn declares that she and Carter are still friends and he’s about to make a mistake that will change his life forever. Wyatt’s nervous about her having all these opinions on what Carter’s doing and questions why she’s not focused on her own love life if she and Eric are having issues. Quinn argues she wants the best for Carter and marrying someone you don’t love is something she wouldn’t wish on anyone. Wyatt realizes she doesn’t think Carter isn’t in love with Paris… she knows it. “Carter’s still in love with you, isn’t he?” Quinn wears nothing is going on. Wyatt argues they’re covering up their real feelings for each other. Quinn protests. Her commitment is to Eric. Wyatt marvels, “So Carter is just going to out and find a similar commitment?” Quinn throws up her hands. “Now you see why I’m so concerned!” She can’t let Carter throw his life away… because of her.

In the design office, Carter asks Paris to be his wife. “Let’s do this.” He want to move on with their lives. Paris’ mind is blown. This is the last thing she expected. She reminds Carter he told her to marry someone else. Carter shouldn’t have done that and implores, “I need you more than I can express.” Paris decides, “Let’s do it,” and throws herself into his arms. Paris squeals that they’re engaged and reminds him they forgot to put the ring on. Carter the ring on her finger, and she plants a big, excited kiss on him. She enthuses about his great taste and exclaims, “Oh my God, I have a fiancé!” Carter is glad she likes the ring and flashes to putting it on Quinn’s finger. It was meant for the woman he would marry. Carter decides they shouldn’t wait and should wed right away. Paris is stunned. 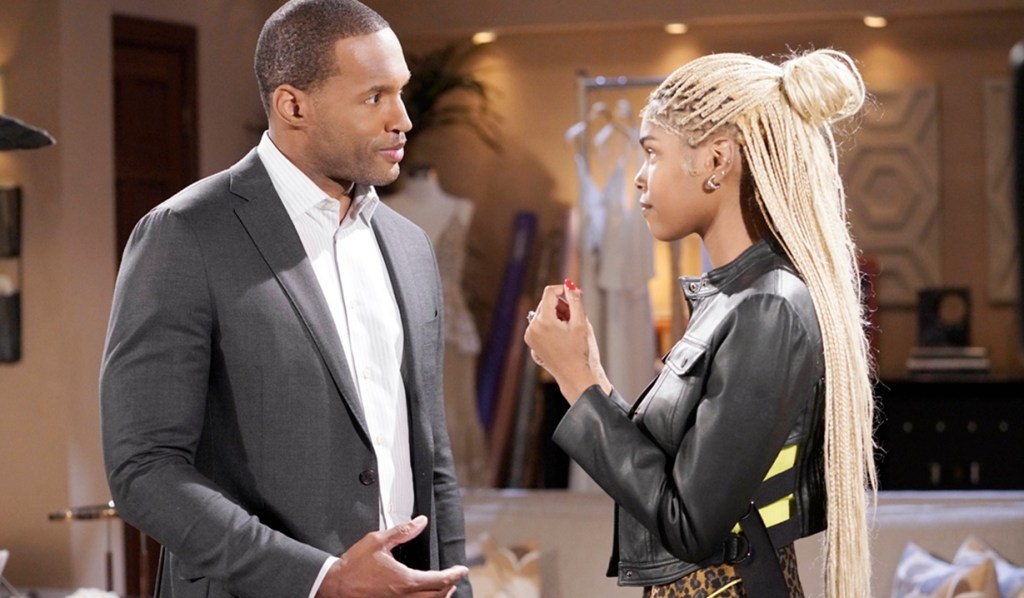 More: First look! ‘Steffy’ and ‘Finn’ back together again

At Li’s place, she stammers and tries to pretend she wasn’t calling the police. Sheila rants, “You had to lie to me! Making your little phone call.” She kicks the remnants of the phone across the floor and intones, “And now you’re going to pay for it.” Li warns her that without her, Finn won’t survive. She implores Sheila to put Finn first. Li insists they can work together to bring their son back. Sheila shakes her head. “You’re lying. You don’t want me here.” She wanted to believe Li, she wanted to believe that she thought Finn needed both his mothers. Li sneers, “The woman who shot him… almost killed him?!” Sheila lunges and grabs Li by the throat up against the wall. Li chokes out, “Let…go….” Sheila hollers that she loves her son more than she will ever know. Li punches her and knocks her to the floor as she retorts, “Not like his real mother does!” They struggle on the floor and Li gets out the door. Sheila yells, “You’re not going to get away from me!” 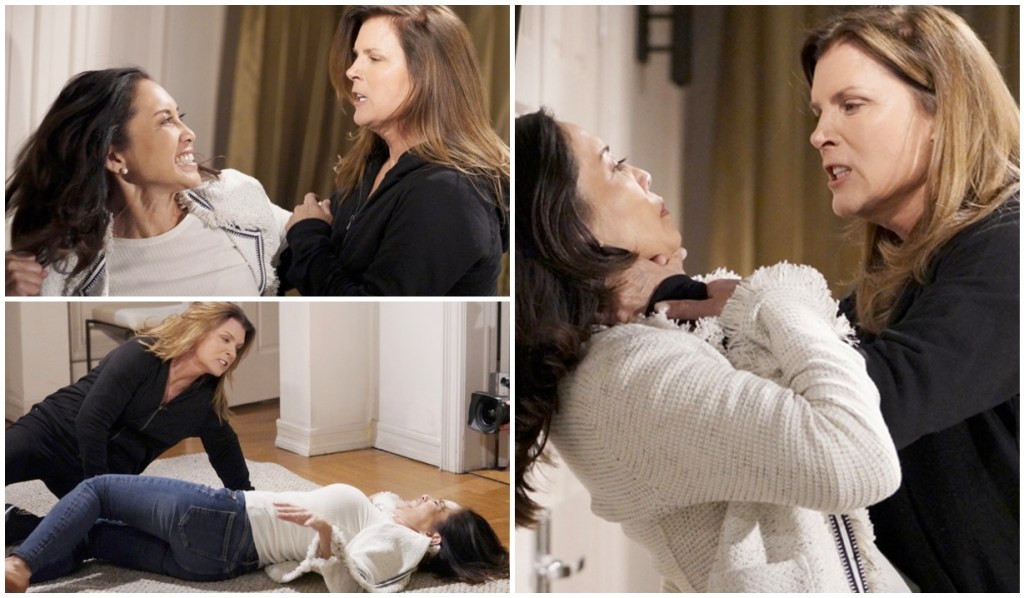 Li makes her way into her car amid the pouring rain and Sheila follows her out. Li rambles, “No, no, no, no, no,” and speeds off. Just then, Mike appears. He got Sheila’s message. She grabs his keys and says, “I need your car!” Mike gawps as she takes off in pursuit of Li. 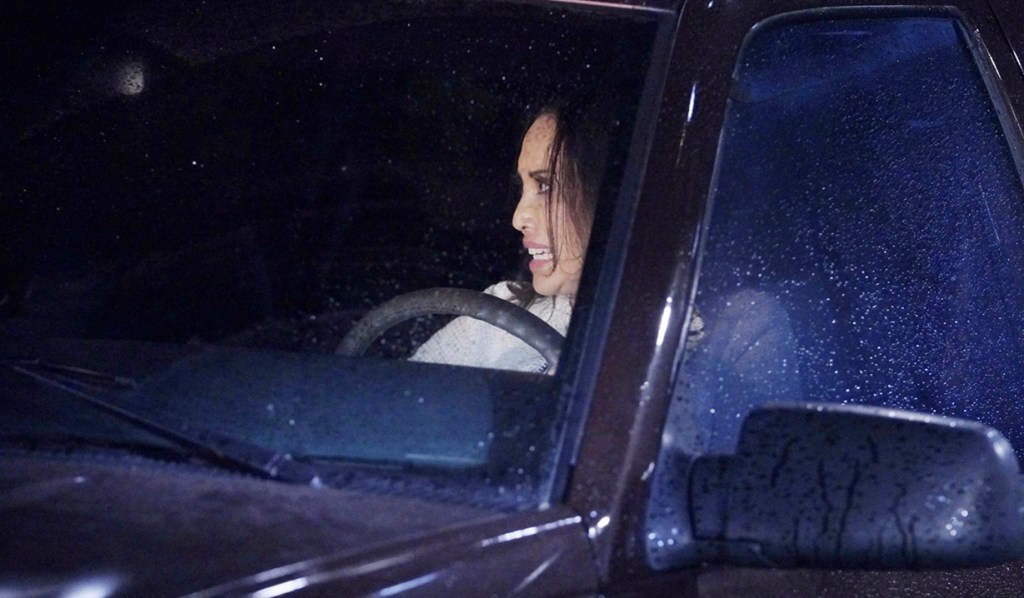 At Forrester Creations, Carter is pacing the design office and telling himself that Paris will make a good wife, when Quinn walks in. “You did it? You proposed?” She pleads, “Why?” Carter says it’s the way it needs to be. He can’t have her, and he can’t have Paris threatening her marriage. “So that will stop now.” He plans to be devoted to his wife. Carter wants to settle down and have a family. He’ll do anything to put her behind him. “I can’t live like this anymore. I love you too much.”

More: Is an annulment in Carter’s future?

At Brooke’s place, Ridge asks her to call him if anything happens and vows he’ll do anything in his power to protect her. They clasp hands as he goes.

In the pouring rain, Li drives in a panic. Realizing Sheila’s behind her she screams, “Godammit, Sheila!” In her vehicle, Sheila vows Li won’t get away from her and mutters that all she had to do was share Finn. “I’m never going to be separated from my son again.” In her truck, Li screams, “Back off you crazy!” There’s a collision and the vehicle bursts into flames before dropping over a barrier into a body of water. Sheila gets out of her car, looks at the flaming, sinking truck and grins with satisfaction. 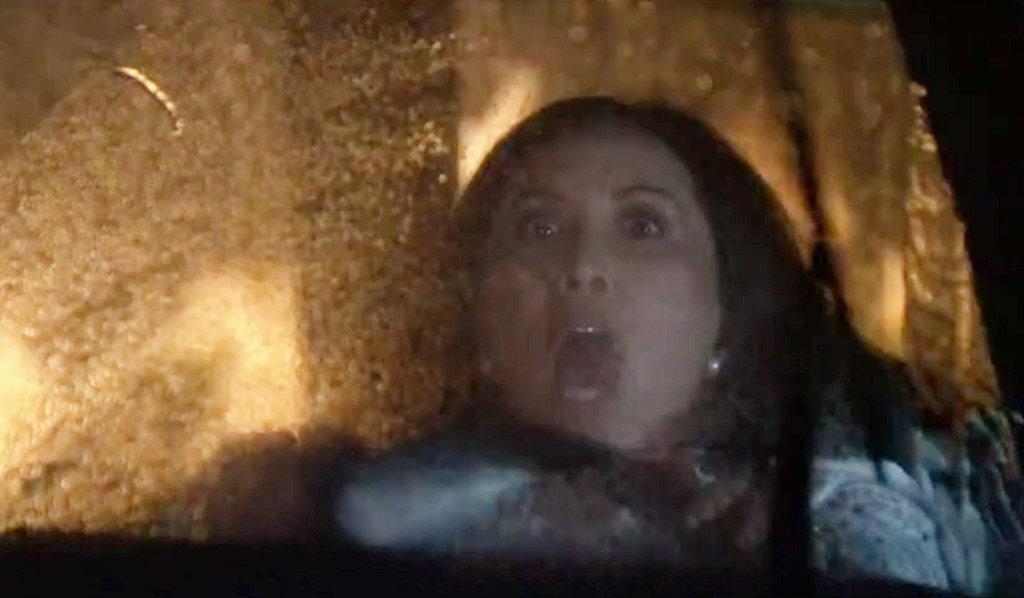 Next on The Bold and the Beautiful: Paris flaunts her engagement ring to GraceRidge gives Carter a truthful perspective on his situation with Paris and Quinn.

Look back on the good, the bad and the mannequin as you peruse Thomas Forrester’s history in the photo gallery below.

Please note that if you purchase something by clicking on a link within this story, we may receive a small commission of the sale.

Miss today’s episode? Catch up via Paramount Plus.